This Cosy 2-Bedroom Condo Apartment Is Huge On Style 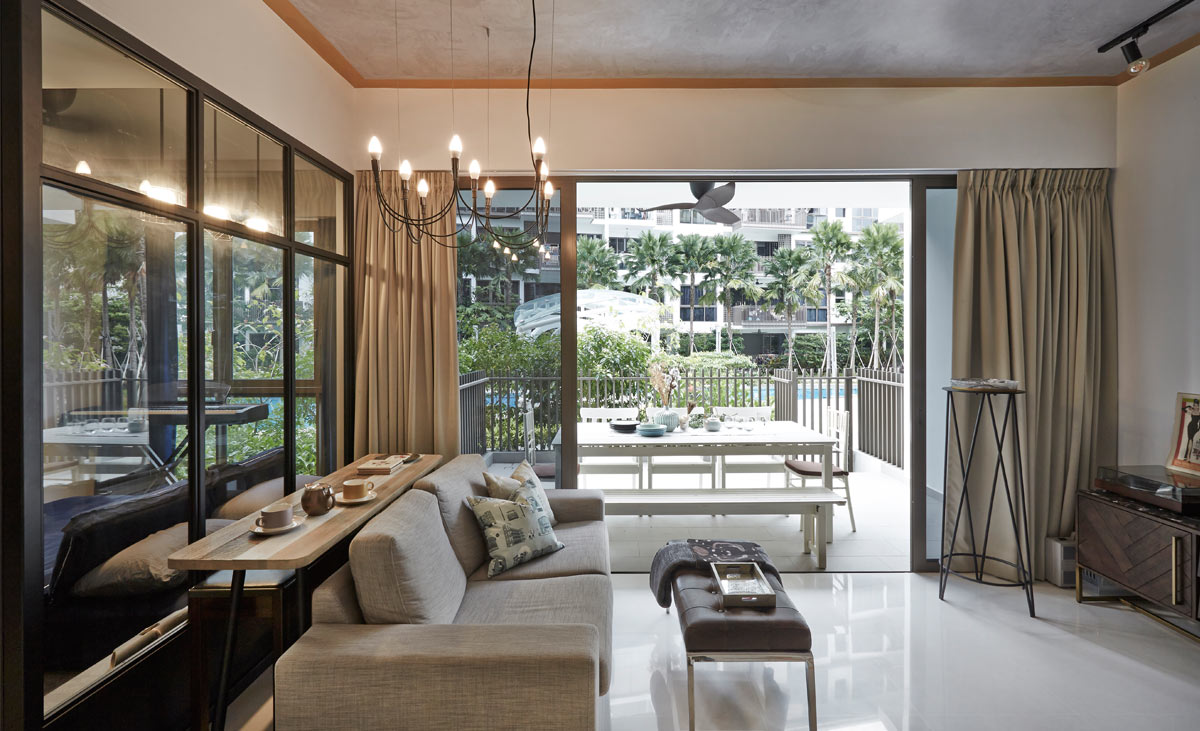 Other than dining in convenience at the Gibson console table from Castlery behind the sofa, the homeowners can also choose to dine al fresco at the balcony. The private enclosed space or balcony has a generous square footage so it would be a waste not to utilise it as an extension of the living zone. 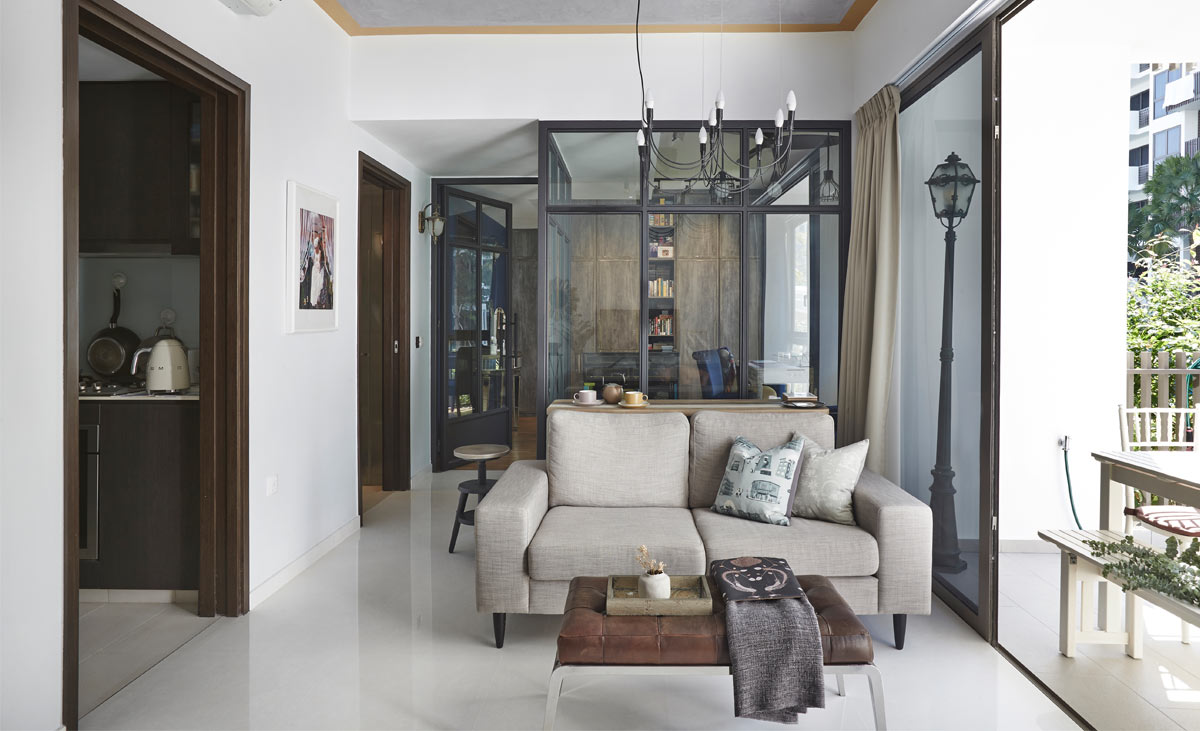 There were considerations to use cement screed as the basis of the ceiling feature. That was replaced by special effects paint instead and the paint is used for the gold border as well. A street lamp which was bought from Johor Bahru complements the grand design. 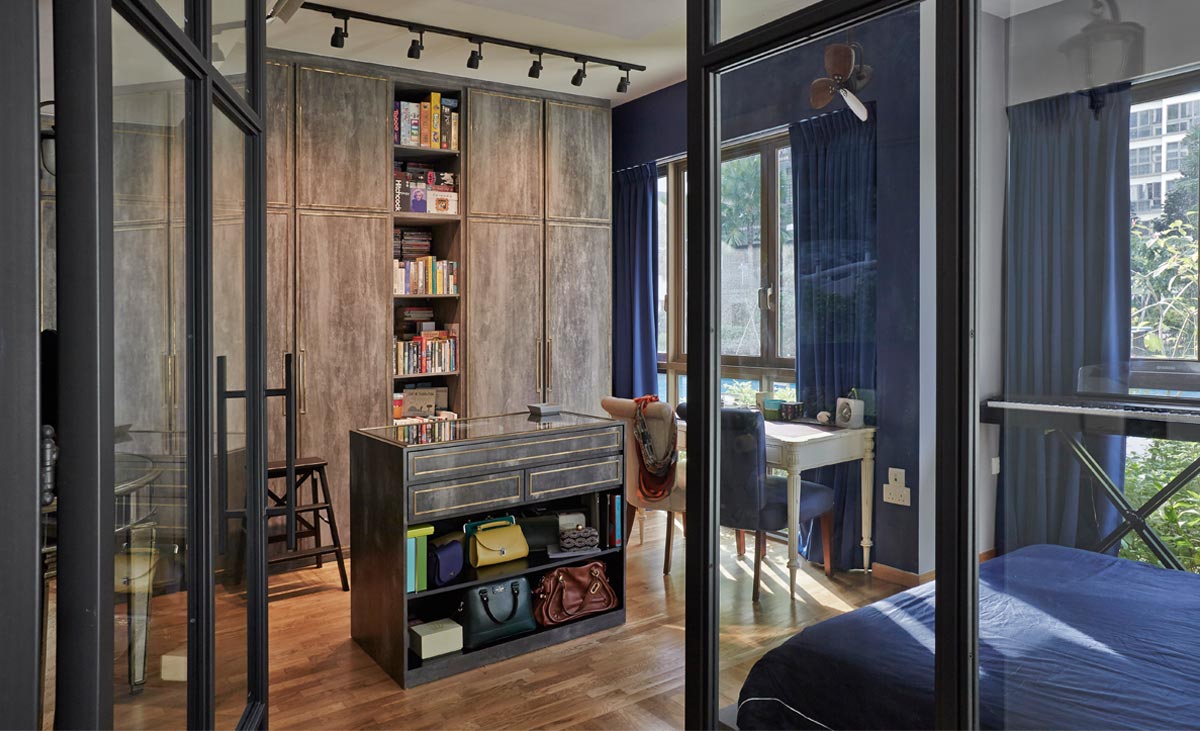 Embellished with brass strips, this island counter adds to the picture of elegance with the designer’s dedication to details. Functionality has not been neglected with the handy storage slots incorporated into its base and pull-out drawers for small accessories. 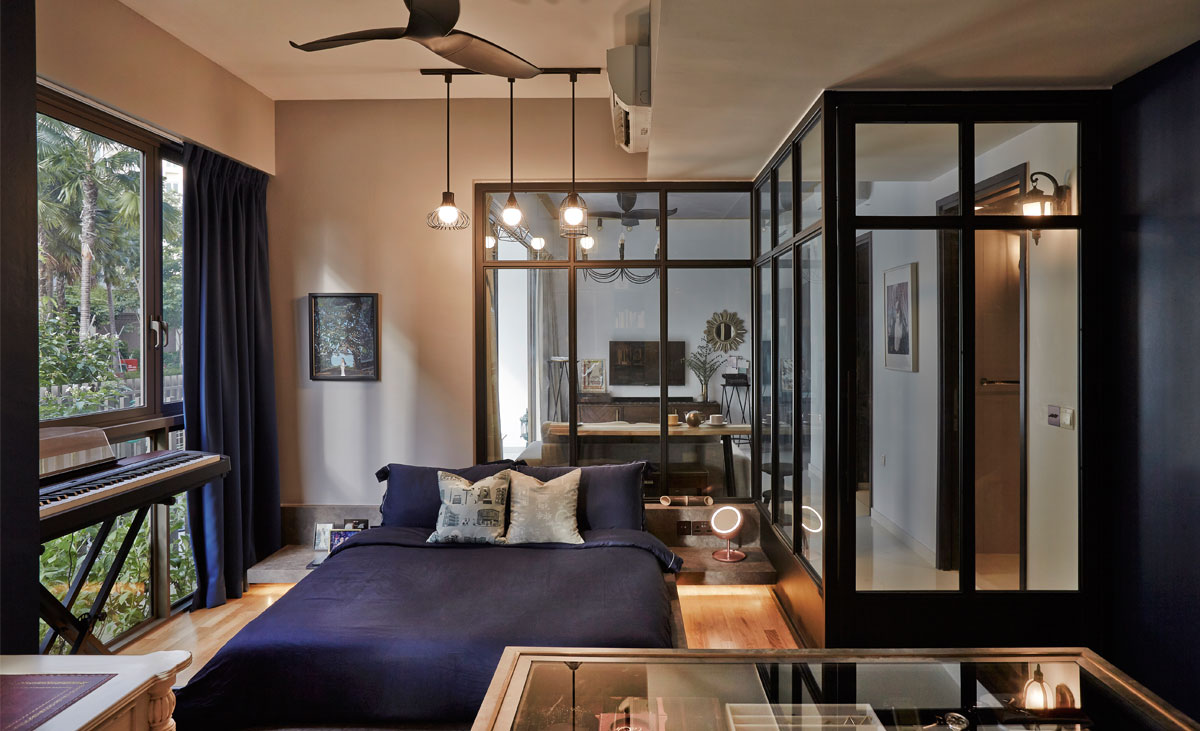 Besides opening up the confines of the bedroom with a glass divider, a low-rise platform bed accentuates the spacious and welcoming ambience. This custom-built frame is integrated with an elongated floating bedside table and recessed lighting at the base as well. 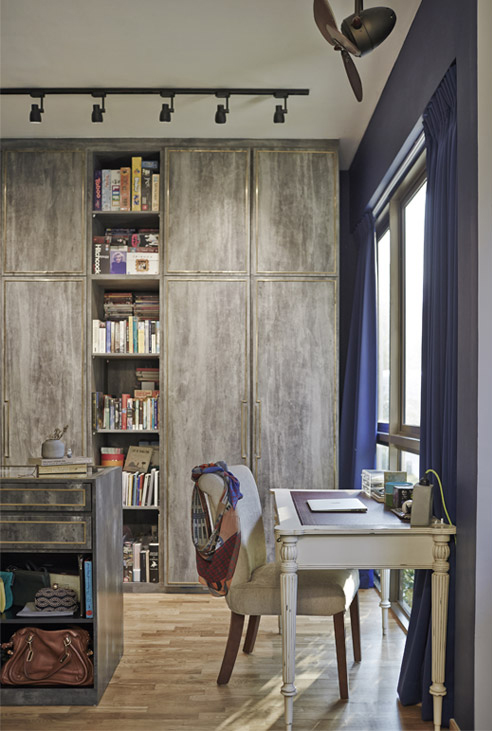 Besides storing clothes, this row of wardrobes which spans the entire wall area is used to stash away books, bags and board games. Streamlining it to an all-encompassing storage unit keeps the floor area clear and makes more room for other furnishings like the island unit.

A world of grandeur can come in small packages as attested by this cosy 580-square foot apartment located in the east. Making this haven of old-world glamour come to life is Jade Kwok, an interior designer from Fuse Concept. She says, “The homeowners envisioned their home to be reminiscent of old Hollywood glamour, much like the Great Gatsby.” However, before moving forward with these exciting aesthetics, the original layout of the brand new unit had to be reworked quite extensively.

“The existing layout was less than ideal for what the owners had in mind,” says Jade. Like any other regular apartment, the two-bedder home has a series of rooms which is separated from the communal zones by walls. Its small stature posed a problem though; the boundary walls diminished the floorplate and made everything felt restrictive and unappealing. “Hence, we had the proposal to replace the walls separating the bedroom and living area with a framed glass divider,” she exclaims. “This solution not only provides a clear demarcation of the private and communal zones; it places the spotlight on the private area as a showcase piece.”

With the layout reconfigured and the walls taken down, the two bedrooms have been integrated as one and now reside behind a sleek glass showcase. The tempered clear glass panels are supported by a powder coated mild steel structure with a slim profile frame. “The homeowners were particular about the finish,” Jade explains. “They were neither fond of the shiny smooth look or thick profile that a typical aluminium frame would achieve.”

With the glass showcase thrusting the private quarters into the limelight, it was important that the aesthetics within the newly-expanded bedroom have to be uniformed with the communal areas, if not, even more spectacular. That they did, by designing a full-height wardrobe and a matching island unit for the room. It brims with opulence thanks to right laminate finishes and brass embellishments. “Initially we had the idea of using wooden moulding to offer a look of gilded opulence but that was shelved as the scale of the moulding looked a tad heavy and overbearing,” Jade explains the origins of the brass detail. “As brass is not a common feature incorporated in carpentry, it took a while to source for a suitable material that could achieve the burnished look.”

The glass-enclosed bedroom is not the only bold design statement; another unconventional idea is the compact dining area. Unlike grand dining rooms, a sliver of space right behind the sofa works as a cosy dining spot. The choice of a modest console table and a bench as their dining table actually makes more practical sense for the couple. “It would only be the two of them dining together on a daily basis,” exclaims Jade, “so there wasn’t a need to have a full-sized dining table in the already limited space.” Most importantly, streamlining the dining space prevents a visual overload – since the glass showcase, loose furniture and decorative ornaments all share the same confines.

Speaking of furnishings, both designer and homeowners worked hard in creating an authentic air of old world style with these finishing touches. Jade recommended well-suited furniture stores like Taylor B and Hock Siong. They also tried their hand at repurposing pieces such as the shoe cabinet instead of going for the usual built-in options. “We were very happy to repurpose a glass display cabinet with decorative handles and moulded finishes to showcase the homeowners’ impressive collection of boots and heels,” says Jade. “It was spray painted an anthracite tone to complement the interior.” Even the tiniest details were not spared. “We have Victorian-styled wall lamps, mirrored accessories, bronze-plated toggle switches and sockets that complement the concept beautifully,” she adds.

This was adapted from an article originally written by Disa Tan published in the February 2018 issue of SquareRooms. Photos: Fuse Concept

Priya Dharshini said: "That 5-room HDB renovation was a spot on! Thanks for sharing your work here. Kudos to your team.".