Take A House Tour Of This Industrial-Meets-Eclectic Clementi Flat 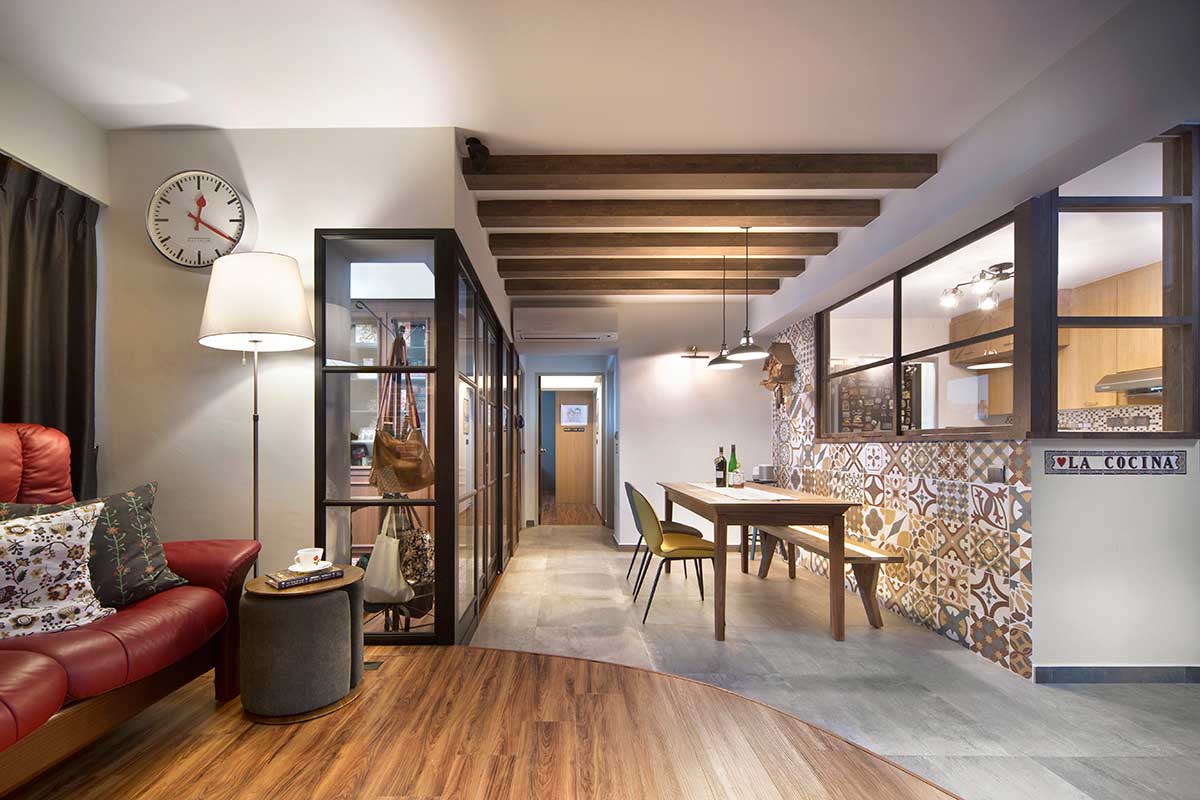 A blend of diverse styles – this eye-catching apartment has been given a complete makeover with a collection of colourful accents and various customised fittings that now define its distinctive character.

In order to make room for the study’s stately entrance, one side of its wall had to be hacked away before its sliding doors could be installed. Aside from a foldable murphy bed, the study, which doubles up as a guest room, was also outfitted with a customised desk with height-adjustable legs along with carpented rear cabinets.

Aside from its outstanding collection of Peranakan tiles, the dining area also features a custom-made American walnut table from local furniture design studio Plane and Bevel. The transformable dining surface is accompanied by a reclaimed pine bench, industrial stools and contemporary leather chairs that enhance the space’s multi-faceted appearance. 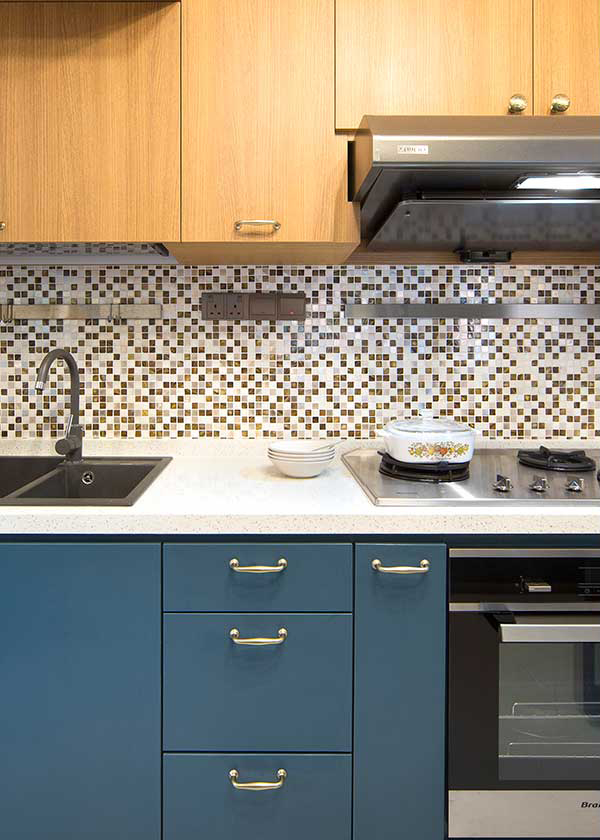 Inspired by European cottages, the kitchen was designed with framed glass windows that offer a clear view into the adjacent living and dining areas. As the homeowners are frequent cooks, Andrew made sure to seal the gaps between the panels to prevent leakage of cooking fumes. Completing the look is a pleasant colour palette of tan, teal and brass that gives the kitchen a soothing coastal vibe. 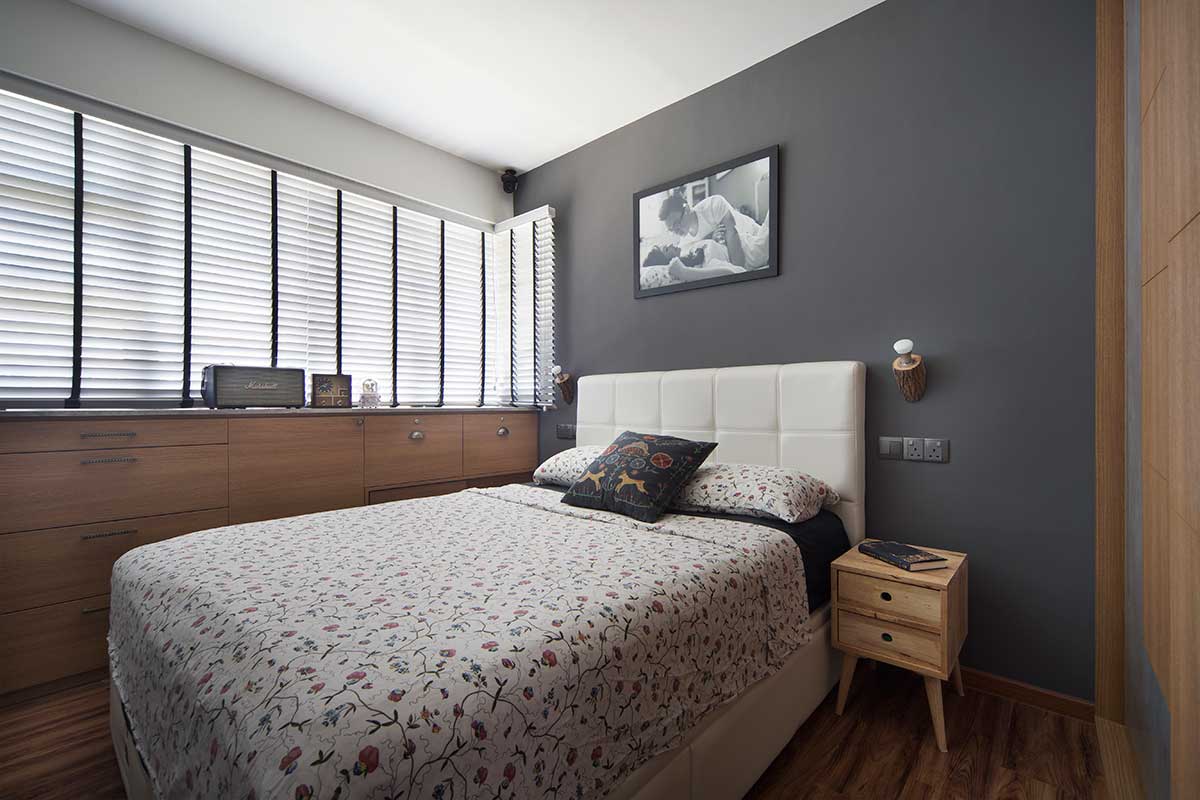 Possessing an industrial-chic aesthetic, the master bedroom’s wardrobe carefully blends metal and woodgrained textures into a unified structure. On the opposite end, a sideboard incorporates several drawers, sliding cabinets and a display counter as part of a highly-functional compartmentalised fixture. Meanwhile, quirky accents in the form of tree bark bedside lamps serve as reminders of the apartment’s overarching design theme.

Interiors that embrace the eclectic style may appear jarring but this impression is far from the truth. While it is indeed a diverse blend of contrasting design elements, each aspect of this approach to home decor is part of an “integrated and inclusive whole”, according to Andrew Poh from interior design firm Fuse Concept.

“Each of the rooms in this apartment possesses a different look and are clearly demarcated from each other. However, they are all part of a singular, comfortable home,” says Andrew, who is the designer behind the look and feel of this visually-arresting 1,000 square foot apartment.

Despite the disparity in colours, textures and shapes, every room gives the impression of a clean and clutter-free environment, thanks to their neat layouts and efficient organisation. This is in turn accomplished by several built-in storage fixtures, cleverly designed to camouflage and conceal any visible clutter.

Among these is the living room’s raised platform, which is an integral part of the home theatre set-up. The structure comes with hidden access panels through which the sound system’s wires are run through, as well as additional power points and storage receptacles for added scalability.

Equally indispensable are the living room’s AV swivel-rack system and glass-fronted display shelf – both of which are located along the same stretch of space as a CraftStone feature wall that brings both grit and warmth to its surroundings.

Forming a sleek and accessible storage nook for the owners’ home entertainment system, the rack is integrated with adjoining carpentry for a seamless look. As for the display shelf, it swings out to reveal the bomb shelter’s entrance, which is tucked away behind an innocuous facade of blu-ray DVDs, trophies and collectibles.

Past the living room, overhead beams lead into the apartment’s central passageway that is flanked by the study’s entrance and a cosy dining area. Of particular note is the colourful backdrop of the latter, made entirely out of ceramic tiles embossed with Peranakan motifs.

Although they separate the dining space from the kitchen, sliding window panels embedded within the feature wall enable easy transfer of food, drinks and dishware between both zones. As a fully-functional space, the kitchen also comes with essential built-in storage and cooking appliances, accompanied by a smattering of metallic accents in the form of burnished brass handles.

In contrast, the study assumes a more grounded, but no less cosy appearance. Black-lined glass sliding doors and a material palette consisting of different wood tones make up the space’s decor, which imparts the impression of an elegant stateroom.

The interior designer approached the design of the master bedroom and its accompanying en suite with a clean, minimalist image in mind. A complementary combination of ultra-grey surfaces, natural wood grains and raw brushed steel textures – defining features of the bedroom’s custom-made wardrobe and rear wall – was deliberately included to bring out a rustic-chic look within the boudoir.

The master en suite similarly takes on a simple design and layout, save for a collection of Moroccan-inspired ceramic tiles installed within the shower zone. To maintain a dry area in the en suite, Andrew also set up a see-thorough shower screen, located in close proximity to a suspended vanity clad in teak laminates and topped with a pearl-grey KompacPlus solid surface slab.

For Andrew, this project was not just about creating a home where form and function co-exist. “If you notice, each of the rooms plays a different role in the house, in addition to having its own unique personality,” he says. “And that is exactly what a family is – a celebration of differences.”

This was adapted from an article originally published in the August 2017 issue of SquareRooms. Photo credits: Fuse Concept

Fast Food Near Me said: "Hello. This post was extremely interesting, particularly because I was looking for ideas on this topic last Thursday. Best regards, Thompson Valenzuela".
Sams Club Locations said: "Thanks for sharing such a good blog! King regards, Boswell Dencker".
Priya Dharshini said: "That 5-room HDB renovation was a spot on! Thanks for sharing your work here. Kudos to your team.".